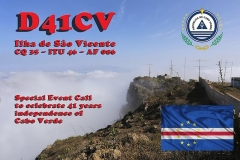 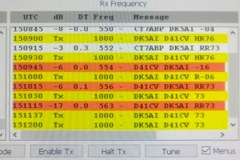 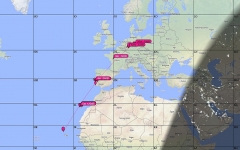 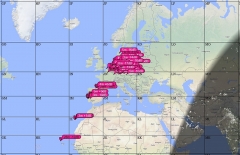 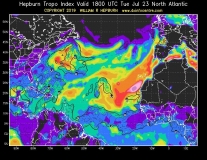 Alain, TR8CA, from Libreville / Gabon, has been active via EME for quite some time with a single Yagi and 500 W output on 144 MHz. Several times I had received him in the past, but due to propagation and the small EME equipment on both sides, we never completed. On May 10, 2019 everything fit together and also Faraday was cooperative. With reports -23 dB send / -25 dB received another single Yagi – single Yagi QSO and of course a new DXCC #85 on 2m could be logged.

May 16, 2019 was another day with good sporadic E on 6m. It is just the beginning of this year’s season and already in the early afternoon stations from 9K2, A41 and EK could be worked. At 17:21 the signal from TR8CA popped in at 50 MHz. The QSO over a distance of 5,640 km (3 Hop Es) was easy and a new country #108 also on 6m. Great fun and many thanks to Alain for the quick confirmation via LotW!

Today K1JT, Prof. Dr. Joe Taylor, Nobel Prize Winner and father of the WSJT Software Package, showed up on 17m in FT8 mode. It was just a short and “digital” contact but very glad to meet this great personality and Radio Amateur on the band.

After waiting for almost exactly 4 months, the postman has finally delivered the long-awaited parcel today: Mail from the ARRL Headquater in Newington, USA, my DXCC-Challenge-Plaque with Endorsement 2.000. 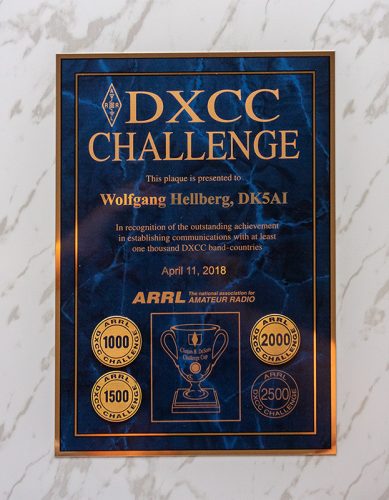 As the name says, this is plaque is a real challenge and a hardcore Award for the dedicated HF-Radio Amateur. The DXCC Challenge Award is given for worked and confirmed at least 1,000 DXCC band-entities on any amateur bands, 160 through 6 meters (except 60 meters). It’s a massive wooden plate with a blue-gold-etched plate on top. The Endorsement 2,000 means  an average of 200 confirmed DXCC Entities on every of those 10 bands.

To reach all these band points countless hours in front of the station were required but it was no less tough to get the necessary confirmations. Thanks to the help of the Logbook Of The World, things have become a bit easier in recent years. It would be nice if all stations finally could use this opportunity.

Next stop wants to be 2,500 – that might take a while and it’s great to have a next step in DXing.

The weather before Christmas was quiet and suitable for maintaining antennas. So I improved the matching of my 160m inverted L-antenna to get some more DXCC entities during the days off. Conditions on Top-Band were very good at a K-index of 1 and the signals, especially from Asia, were very loud in times. The following 6 new countries have been logged: Mozambique (C93PA), Azores (CU3EQ), Mongolia (JT1CO), South Korea (HL5IVL), Taiwan (BV1AP), Mexico (XE1TD). Also four new Zones for 160m WAZ (03 / 06 / 23 / 37) and seven new US-States for the 160m WAS were worked: Arkansas (K5GO), California (K6RW), Colorado (K0RF), Michigan (K8TLC), Minnesota (K0TT), Montana (KM7W) and Utah (WA7LNW). It was interesting to see how the terminus of the greyline correlated with the higher signal strengths (see picture). 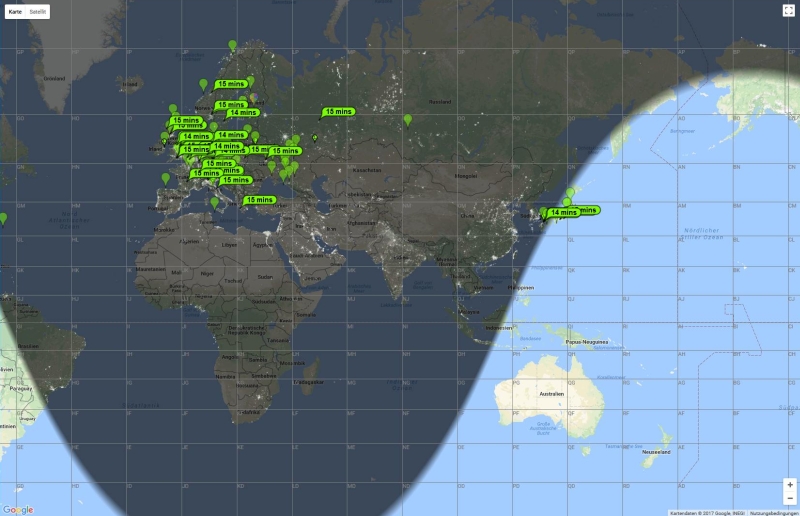 Talking about 2m I concentrated to EME during the days between Christmas and New Year. The moon was in good position with low degradation and finally 43  initial callsigns, several new WW-locator and two new DXCC entities found the way into the log. After several tries I was very happy to work Ricardo, LU7FA, on Dec. 27 for DXCC #67 and Bing, YC2MDU, on Dec. 31, 2017 for DXCC #68. It is interesting to mention that LU7FA has just 2 antennas and YC2MDU using just 400 W output. Two great belated Christmas gifts and a happy ending 2017.

During a nice ES-opening today OJ0DX (Market Reef), operated by a German Crew around DL3DXX, found the way into my logbook on 50 MHz and later also on 1.8 MHz. This is DXCC #101 on 50 MHz.