Bernie (ZS4TX), known for his previous activations of A21EME, 7P8Z, 3DA0MB, 3B8/ZS4TX, started another “One Man” DX-Pedition in late August 2022. The goal this time was the Cuando-Cubango Province in Angola. This was Angola’s first 2m EME activation to date and a nearly 7,000 km round trip for ZS4TX.
Bernie’s Equipment for 2m were 2x 2M18XXX and IC-9700. Due to difficult weather conditions, Bernie had to stop activity after only 4 days. Nevertheless, I managed to complete a nice QSO and that’s DXCC #99 in the log.
Thanks to Bernie for another contact and the great activation! 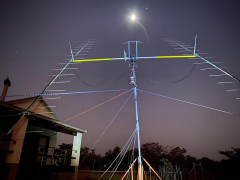