Beside the Microwave Contest beginning of June the month was not very spectacuar at all, when talking about 10 GHz. Temperatures were not that hot to build up very high clouds and activity outside the contests is normally quite poor. 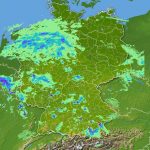 During the afternoon some hotspots were formed in southern Germany. Very glad to work again with Giorgio, IK3GHY (JN65DM/688 km). Heard but not called were DB6NT and DL1ATI.